The most difficult airports for take off and landing

Princess Juliana International Airport is considered the most difficult for take-off and landing, it is the main airport on the Caribbean island of Saint Martin. The airport is located on the Dutch side of the island, in the country of Sint Maarten. By the way, it is the hub of Winair. It's a public airport of civil aviation, however its location can be dangerous both for airplanes and tourists. Because airplanes can fly 10-20 meters above passengers' heads.
The airport has just a single runway measuring 2,300 meters long and 45 meters wide.
The 05 instrument approach is a VOR/DME, but usually the approach is according to VFR.
Pilots guided by GPS take a more precise approach than those making a visual one. Local airport rules prohibit aircraft from flying lower than 500 feet (150 meters).
Arriving aircraft approach the island on the last section of the final approach for Runway 10, following a 3° glide slope flying low over the famous Maho Beach.
In 2017 a New Zealand woman died from injuries sustained by jet blast from an aircraft performing take-off. Tourists are often criticised for dangerous behavior on the beach. There is even a sign to be attentive, because jet blast can be really dangerous. There are always people standing near the fence, and several people were blown back into the sea by jet blast. 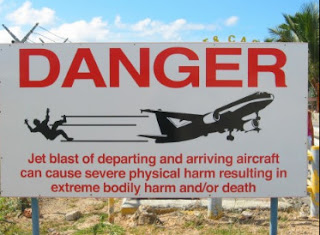 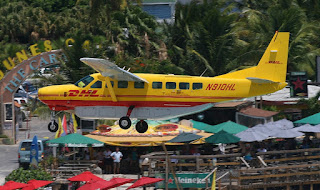